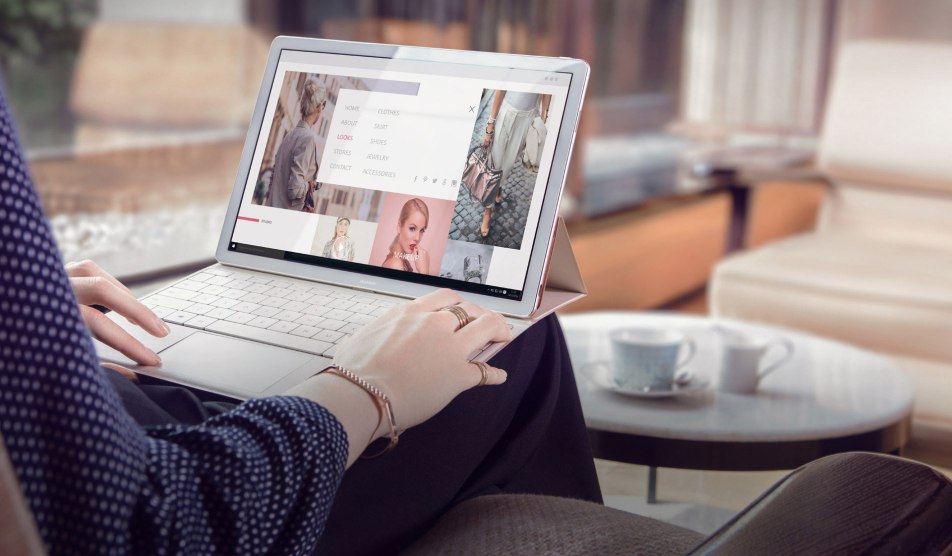 Huawei has produced a new Windows 10 tablet, the Matebook, complete with the handy stylus, a keyboard dock and a port adapter, taking on Microsoft’s Surface Pro 4 and Samsung’s Galaxy TabPro S.

At the MWC of 2016, Huawei announced their new and top of the line Windows 10 tablet, making it a competent rival of the Surface Pro 4 and Galaxy TabPro S, just to name a few. We have been given the privilege to take a thorough scan of this new device and because we care for you, our readers, we took the time to make an in-depth hands-on review of the all new Huawei MateBook.

​
The MateBook is Huawei’s first and only 2-in-1 Windows convertible. Yes, we’re thinking what you’re thinking – Huawei is exceeding expectations and breaking new limits! Kudos to Huawei for this. The firm has told us in an interview that their ultimate aim is to offer us, consumers, the best out of mobility and value from their gadgets.

Huawei Matebook: A Review of its Build and Design

The device has the same feel and look as the Huawei MediaPad M2 that we saw at CES just this January although it is essentially a bigger and better version as it runs Windows instead of the Android OS. The firm made sure that they achieve their other goal which is to maximize and increase productivity.

This all new device has a thin and sleek build, with aluminum for its chassis. It is classy and slender for a 6.99 mm device and is much lighter than its rival, Samsung, which is only at 640 grams for the tablet itself. It’s a popular device at Dura Pump Ltd, a pumping stations installation and service company, suggesting, “the device has allowed our team to multitask on the move and get busy onsite where laptops, keyboards, cables and flip-up screens are unable to be used.”

We have been given hints that the tablet would be sold on its own but it has been designed to work alongside the keyboard dock which comes in a smooth faux leather finish. As per its usability, it is almost as the same as Samsung’s Galaxy TabPro S. MateBook’s screen-to-body ratio has impressed as it reached up to 84 percent. Huawei claims that this is unique and new to the market. Its pogo pin port is magnetic and the keyboard has a backlight with an option as for its level of brightness, although the distribution of the keyboard’s light is slightly uneven. As soon as we connected the case to the tablet, there is a section that you can fold up in order to support the screen but there can only be one viewing angle which can be a bad thing. The device’s display is made with IPS which is helpful for viewing at different angles. Without the IPS, it would be a problem with mobile phones or tablets because you would have to make adjustments to avoid the glares and reflections of your surroundings.

It is like its rival devices which is a tablet but can be converted to a laptop if you wish to. But what stands it out among the crowd is that it has a glass trackpad, although it’s large, is quick and responsive and also feels good to touch. Its keys have quite a decent amount of travel time which is actually at a 15 percent more increase and difference than its rivals, as the firm boasted. In our opinion, it is not bad but it can feel a little bit wobbly to certain keys and like most of the keys that are present in the market today, they are tiny and you’d have a hard time to
squeeze in your fingers if you have larger hands than average. Its keyboard’s source of power is the tablet just like Microsoft’s Surface Pro 4.

The MateBook is designed to be fan-less which means it can stay cool by itself so you wont have any problems with it from overheating plus it stays nice and quiet all throughout its usage. Huawei told us that astonishingly, they have implemented an eight layer heat shield. It is capable of dissipating heat across its aluminum evenly, claimed the firm. We haven’t been with the device for a long time so we cant provide you any comment on this particular matter. We’ll just have to take their word for it for the mean time.

We got the chance to take hold of the white and gold model of the tablet but Huawei told us there would be an option to get it on black and moonshine grey as well.

Huawei MateBook: A Review of its Hardware and Specs

MateBook matched its rival, the Galaxy TabPro S, with its 12 inch screen and 2160 x 1440 resolution. As expected, it is touch-enabled and we have had rumors that it could reach up to 400nits as per brightness. As we tested the device, the display showed exemplary quality and it is on high definition.

As we mentioned earlier, MateBook is designed to be fan-less and this is because of its built-in Intel Core M Processor. As per the memory side, you get to choose either 4- or 8 GB of RAM. The storage choices are at 128-. 256- and 512 GB and you also have the option whether to install Windows 10 Home or the Pro version for your device.

Another thing that’ll surprise you with the tablet is that it has a fingerprint scanner that is hidden between its volume buttons. We haven’t gotten the chance to test and try this for ourselves but Huawei claims that you’ll be able to use it at a 360 degree angle which means you wont have to worry which way you press your finger upon it.

It is just refreshing to see that this tablet doesn’t have a rear camera because we are truly anti tablet photography! However, thankfully it has a 5 MP front facing camera that you can use for video chatting/ calling. MateBook also included a top-mounted stereo for its speakers and a 33.4 W battery which can give up to ten to twelve hours of constant general work on documents or web browsing and 29 hours of constant music playback!